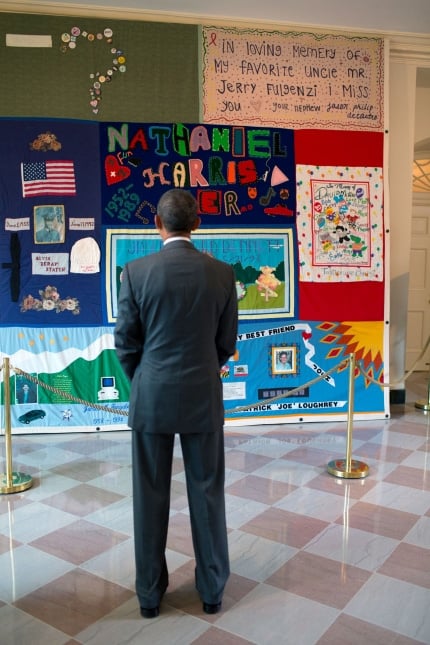 The International AIDS Conference has returned to the U.S. this week. And appropriately, the Quilt that honors those lost to the disease is being seen again by many as well, including those visiting the White House:

One enduring symbol of the lives that have been lost is the AIDS Memorial Quilt. First started in 1987, the quilt now contains the names of more than 94,000 of individuals who have died of AIDS on more than 47,000 panels.  The quilt was first displayed on the National mall in 1987. During the conference, panels of the quilt will be shown on the mall and in over 50 locations throughout the District of Columbia metropolitan area, including the White House.

Earlier this week a section of the Quilt was put on display in the East Wing, so that the hundreds of visitors that go through the halls of the building each day can stop and remember the human toll that this disease has taken, and how far we’ve come as a country in the fight against HIV/AIDS.  While much work remains to be done, we all look forward to the day when there are no more panels to add to the quilt. Thanks to our collective efforts, that day is closer than ever.