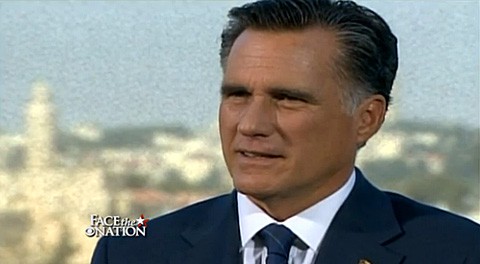 During his trip to Jerusalem, Mitt Romney sat down with Face the Nation to discuss his position on Israel and Iran: 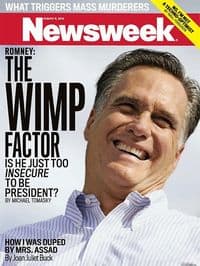 "I respect the right of Israel to defend itself. We stand with Israel. We're two nations that come together in peace and we want to see Iran dissuaded from its nuclear folly."

Romney refused to speak about differences between his and Obama's policy while "on foreign soil".

"I don't want to create new foreign policy for my country or in anyway distance myself…Are there differences between [Obama and me]? Of course. But being on foreign soil, particularly being here in Israel, this isn't the right time for me to draft those out….[W]e should use every diplomatic and political vehicle that's available to us to keep Iran from becoming a nuclear capability state. Those actions should be executed with the greatest speed that we can muster. If all those options fail… then we do have other options and we don't take those other options off the table. But that's as far as I'm willing to go in terms of discussing this matter while on foreign soil."

"If I worried about what the media said I wouldn't get much sleep."

Watch the Face the Nation interview, AFTER THE JUMP…