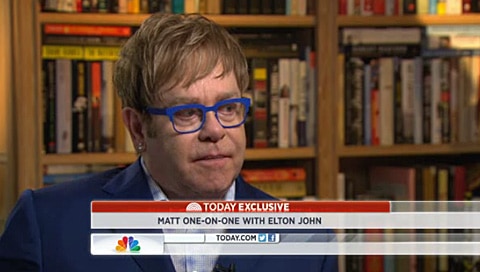 Elton John provoked a lot of anger when he played for Rush Limbaugh's wedding in June 2010. He insists that Limbaugh's anti-gay persona is just a farce, according to a new interview in USA Today. 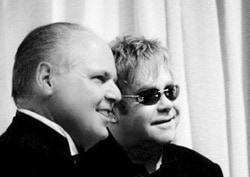 John's hope of eroding stigmas has led him into some deeply unlikely alliances. After he agreed to perform at Limbaugh's wedding in 2010, the two men bonded over music and formed a friendship, despite Limbaugh's conservative views.

Elton is publicizing a new book, Love Is the Cure: On Life, Loss and the End of AIDS. He's doing an interview with Matt Lauer this morning on Today, which I'll add to this post when the video shows up.

UPDATE: Lauer's interview with Elton, AFTER THE JUMP…

Previous Post: « Obamas Caught on the Kiss Cam: VIDEO
Next Post: The Gotye ‘Call Me Maybe’ Mash-Up That May Break the Internet: VIDEO »