Whether it was Judge Jeffrey White of the Northern District of California, Judge Barbara Jones of the Southern District of New York, or Judge Joseph Tauro of the District of Massachusetts (or, of course, a unanimous three-judge panel of the First Circuit Court of Appeal), the result was essentially the same: the Defense of Marriage Act (DOMA) is unconstitutional. 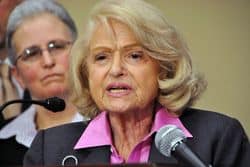 The Department of Justice (DOJ) has asked the Supreme Court to hear the DOMA cases out of the First Circuit and the Northern District of California, bypassing the Ninth Circuit. Earlier this week, the American Civil Liberties Union (ACLU), which represents Edith Windsor (right) in the New York case, asked the Supreme Court to bypass the Second Circuit and take Ms. Windsor's case, as well. Skipping over the intermediate appellate courts is rare, but not impossible, especially when the case is so obviously headed for an ultimate decision at One First Street.

Still, each of these cases — Golinski v. Office of Personnel Management, Massachusetts v. Department of Health and Human Services, and Windsor v. United States – is slightly different. In Golinski, the court preferred to use heightened scrutiny to invalidate DOMA; in Massachusetts, the First Circuit used so-called "rational basis plus," or a more searching form of rational basis review; and, in Windsor, the court rejected DOMA under simple rational basis. A win is a win when it comes to equality and access to the federal marriage benefits, but a Supreme Court decision to hear Windsor, in particular, could bring the scrutiny issue front and center.

In the end, while DOMA will likely die at the Supreme Court next term, the level of scrutiny for sexual orientation discrimination will probably continue its muddled trajectory.

The issue exists at all because the appellate court precedent on scrutiny is old, the Obama Administration has changed the government's long-standing opposition to heightened scrutiny, and, most importantly, no one is entirely sure how the Supreme Court approach scrutiny of antigay discriminatory laws in Lawrence v. Texas.

Scrutiny standards are the lenses through which the judiciary reviews the constitutionality of state action. They come up in all sorts of contexts: Laws trying to restrict freedom of speech get strict scrutiny; laws regulating commerce generally get the lowest form of rational basis review (as should have been the case in the recent health care case). Rational basis review requires that a law or state action be rationally related to some legitimate government objective. Heightened scrutiny, sometimes applied to cases involving gender discrimination, requires that a law be substantially related to an important government objective. A "legitimate" government objective can be anything from conserving resources to protecting the American farm industry; "important" government objectives span a narrower bandwith, reaching only historically essential values of democracy and equality and eschewing simple administrative or financial interests. And, of course, it is easier for a law to simply be "rationally" connected to a legitimate goal than "substantially" connected to one: Lots of things are rational, fewer things are substantially important.

The Windsor case is special because it asks the Court and the DOJ to dive into the heart of this legal controversy. Last year, when Attorney General Holder informed the world (and Speaker Boehner) that President Obama believes that state actions that discriminate on the basis of sexual orientation deserve heightened scrutiny and that under that standard, DOMA is unconstitutional, the Government maintained that its previous position that DOMA could be upheld under rational basis review was still a reasonable (though not its preferred) interpretation of current law. The rational basis fall back was a footnote in Attorney General Holder's letter, but it seemed like the Government's position until oral argument at the First Circuit in Gill. When pressed by the judges, Acting Assistant Attorney General for the Civil Division and former WilmerHale partner Stuart Delery said that the Government "is not here to defend [DOMA] on any standard" and took no position on DOMA under rational basis. So, if Windsor reaches the Supreme Court, the Government may be forced to clarify its DOMA-under-rational-basis position.

In context, this is more than just fodder for ivory tower classroom discussion.

First, even without Windsor, the DOMA cases will give the Court the opportunity to clarify or remuddle the scrutiny standard. The Supreme Court has never explicitly stated a scrutiny standard for antigay laws. Some appellate courts — notably, the Ninth Circuit, in High Tech Gays (1990), and the First Circuit, in Cooke v. Gates (2008) — have said that rational basis review is appropriate for sexual orientation discrimination, but High Tech Gays was decided in a hostile Bowers v. Hardwick (1986) world and Cooke explicitly relied on the Supreme Court's decision in Lawrence v. Texas. Unfortunately, no one is sure what the Court said in Lawrence. At times, Justice Kennedy appeared to refer to fundamental rights, which would trigger heightened scrutiny; at other times, he rejected the idea of intimacy rights as fundamental. Suffice it to say, there is evidence in the Lawrence opinion for both sides of the heightened scrutiny-rational basis divide. And, although Lawrence was decided pursuant to the due process clause and the DOMA cases implicate Equal Protection concerns, federal courts tend to learn from one another when similar issues — namely, antigay discrimination — come up.

Second, the DOMA cases could produce a series of fractured opinions from the Court, even if a supermajority invalidates the law. As I have argued before, these cases offer the Court a rare chance at unity across the liberal-conservative divide. DOMA is anathematic to conservatives who despise federal intrusion into states' rights and odious to liberals who despise the obvious unequal treatment of legally married gay couples. Intellectually honest conservatives should put aside any distaste they have for same-sex marriage as an institution to strike down an obviously unconstitutional law. But, within that, the Court may disagree about the level of scrutiny. In Lawrence, the majority avoided this disagreement by muddling the language and never attacking the scrutiny issue head on. There is even some evidence in Dale Carpenter's new book about Lawrence, Flagrant Conduct, that the seemingly confusing language was meant to gloss over internal disagreements about scrutiny. I am not sure how much I buy that; Lawrence was decided in 2003, some years before lower courts started flouting old and outdated precedent to use heightened scrutiny on antigay state action.

Third, we are having this scrutiny discussion because the President favors heightened scrutiny, the adoption of which would revolutionize gay rights law. Undoubtedly, the organizations representing the DOMA plaintiffs, including Lambda Legal, the ACLU, and the Gay and Lesbian Advocates and Defenders (GLAD), would have made the heightened scrutiny arguments themselves. But, the Government carries more weight in the federal courts and the Obama Administration's position gave Judge White and others the political and legal cover to defy higher court precedent covering their jurisdictions that appeared to foreclose anything other than rational basis review. Historians may look back at the President's boldness in this area of law as one of his signature, lasting, and greatest actions on behalf of gay and lesbian Americans. If Governor Romney wins the next election and puts the DOJ on the wrong side of DOMA, the Supreme Court — where the case will surely be at the time — will have political reasons for upholding the law.

The Supreme Court may take all, some, or none of the DOMA cases, but the last option is the least likely. There is already an appellate court case declaring an act of Congress unconstitutional, and that decision is buttressed by a handful of lower court decisions and the Government's bold litigation actions. With briefing due next month, the decision to hear the case shortly thereafter, and oral argument in the Winter of 2012 (after the election), we can expect a decision in the Spring of 2013. And, regardless of whether than decision includes clarity on scrutiny, it should be a great victory for the gay community and our quest for marriage recognition.