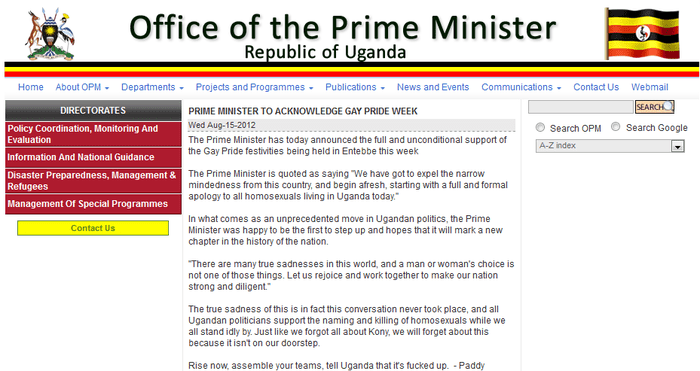 In one action, they posted a formal apology to LGBT people "from" Mbabazi. It reads, "We have got to expel the narrow mindedness from this country, and begin afresh, starting with a full and formal apology to all homosexuals living in Uganda today." (Click image to pop-out.) Anonymous also left a message on the site saying the prime minister's "violations of the rights of LGBT people have disgusted us."

"ALL people have the right to live in dignity free from the repression of someone else's political and religious beliefs. You should be PROUD of your LGBT citizens, because they clearly have more balls than you will ever have," they wrote.

The group also left an explanatory message about the incident at Pastebin:

Today's hack and deface of the Ugandan Prime Minister's site was the latest in a long list of actions against the government and infrastructure of Uganda for crimes against LGBT people.

We currently have full control of the President of Uganda's website.

We will not stand by while LGBT Ugandans are victimized, abused and murdered by a ruthless and corrupt government. #TheEliteSociety and #Anonymous will continue to target Ugandan government sites and communications until the government of Uganda treats all people including LGBT equally and with respect, dignity and immediately ends the arrest and harassment of LGBT.

While the Ugandan government has since reprogrammed Mbabazi's virtual digs, Anonymous' high profile should shed a harsher light on their draconian behavior, including police raids to roundup gay people and revived legislative efforts looking to make homosexuality punishable by death. And there's no overwriting that kind of negative publicity.