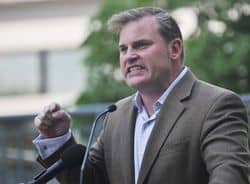 Brian Brown is not a very gracious guest. Following his much-publicized dinner with Dan Savage and husband Terry Miller at their home, the National Organization for Marriage president took to the internet to claim that Savage and other "sexual minorities" are wielding too much power against the Bible's wishes.

He also offers a convoluted theory on why the Bible cannot be used to justify slavery, but can be used against LGBT people.

Here is a snippet, via ThinkProgress:

Christian teaching and practice was never rooted in racism, but in the radical equality of all people and peoples before God. The American South, under slavery, was the exception to the rule—which is one reason why, when challenged, the belief that Christianity can justify not only slavery but also racism, failed abjectly and is now a dead idea. That was Rev. Martin Luther King, Jr.’s great triumph.

But sexual morality and marriage are quite different. Here we have the broad consistent sweep of the authoritative teaching of Christ and the Christian church he founded, recorded in the Bible, and in Christian teaching and practice across the centuries. Here we have something core to the Christian faith, and as I told Dan Savage, it’s not going to go away just because he doesn’t like it.[…]

Something about that dynamic captures what we all see at work at this point in the gay marriage debate. Power is being exercised by a minority, which denies it has the power it is exercising, and denies what we see happening in front of us: this power is being used to label and demonize all who disagree, no matter how relentlessly civilized we are, no matter that we uphold gay people’s real fundamental civil rights.

As Zack Ford notes, Brown in one breathe says the Bible's teachings on racism and slavery were rightfully debunked, yet then uses the same twisted argument to justify his hateful ideology.