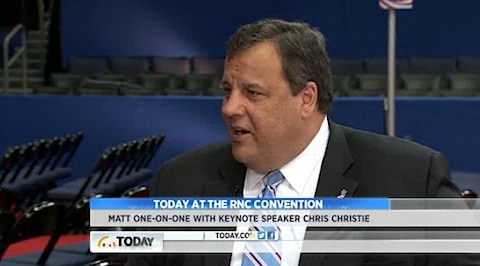 Chris Christie sits down with Matt Lauer on Today to preview his keynote speech tonight at the Republican National Convention. Christie denies reports that he turned down the VP slot because he thinks Romney can't win.

Lauer also asks Christie whether Romney should release more tax returns, and if he should have made a birther joke last week:

I think if he had to do it over again, he wouldn’t make the joke. But you know what, when you’re on camera 12, 14 hours a day, and you’re at a big rallies and you’re just going off the cuff, there are going to be times you’re going to say stuff you wish you could take back. If you get a chance to talk to Governor Romney, I think he’d tell you that he wishes he could take that one back.’