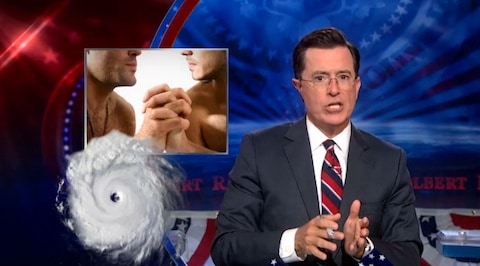 Stephen Colbert took on the Republican National Convention and the coincidence of Hurricane Isaac last night:

"Hurricanes form from rising moisture created by hot steamy man action aboard a gay Caribbean cruise. When that sin gets high enough it makes the angels cry and those tears fall to earth in the form of massive precipitation because homosexuals are a vital part of the water cycle. That's why the gay symbol is a rainbow!"

Added Colbert: "So clearly the liberal gays out there planned the storm by gaying it up extra hard someplace."