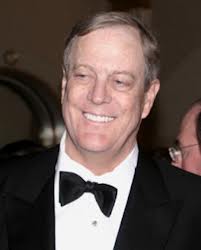 David Koch, one-half of the billionaire Koch Brothers who have pumped hundreds of millions into conservative causes, including Mitt Romney's presidential campaign, and who was once asked by Scott Brown for financial assistance, said today that he supports marriage equality.

"I believe in gay marriage," Koch told Politico. Reminded that Romney wants to constitutionally ban such rights, Koch said, "Well, I disagree with that."

Despite disagreements on social issues, Koch continues to support the GOP because of all the billions his companies — the makers of Brawny paper towel, Dixie cups and a company that produces Lycra among them — can pocket under right-wing policies that benefit businesses and the wealthy.

So why not support the Libertarian Party? Koch did, after all, run as that party's vice presidential candidate in 1980. According to Koch, while he likes the Libertarian philosophy in theory, in practice it "went off the deep end".

"The Libertarian Party is a great concept. I love the ideals, but it got too far off the deep end, and so I dropped out," Koch said. "I think the Republican Party has a great chance of being successful and that’s why I support it," he said, adding "but I believe in the libertarian principles."

Even more reason for Koch to join wealthy donors like Paul Singer and start backing campaigns that support equality, right?