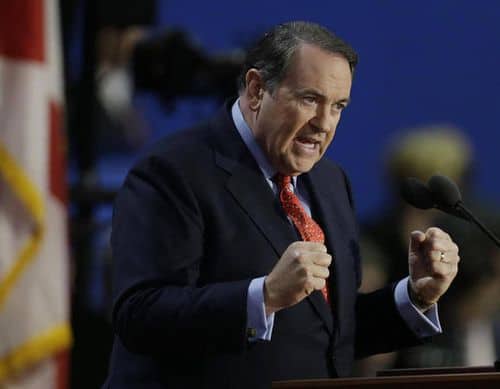 The Republican Convention reaches it's climax tonight, but last night Paul Ryan officially accepted the Vice Presidential nomination and he explained to us how our rights are given to us by God. Speaking of religion, something that is never too far away at the GOP convention, Mike Huckabee spent last night expounding on how Obama is an evangelical man. I guess with all that God talk we shouldn't be too terribly surprised by this craziness.

Despite all evidence to the contrary, GOProud and Jimmy LaSalvia believe that a Romney presidency would be good for the gays. At least for their wallets.

Things are looking pretty grim for LGBT members working in the public sector. All this being said it should probably come as no surprise that Log Cabin Republicans are not pleased with what they are seeing. Want to talk marriage equality with former New Hampshire Gov. John Sununu? You gotta buy him a drink first! Maybe at Homocon, where everyone seems to be having a good time. If you want to be even more disgusted with the state of the GOP, check out Rachel Maddow's report on new Republican voter disenfranchisement. Let's end our talk today about the Convention with a laugh. Jan Brewer really brought her "A" game last night.

Check out a tense debate between progressive radio host Wayne Besen and an anti-gay activist. It'll probably get your blood pretty riled up. I guess it's good that Besen doesn't work for Fox, where they recently fired a host for doing a "pro-gay" interview. Tony Perkins of the Family Research Council obviously doesn't read poll data because, he believes that only a small minority support gay marriage. Dan Savage might want to look out. The University of Texas has decided to end its investigation into a shameful gay parent study.

Two stories out of Michigan today. First a guilty plea in a horrify anti-gay hate crime. The second comes from the University of Michigan and details what we may already know, that saying "that's so gay" pretty much sucks. President Obama's support for Marriage Equality hasn't exactly helped his support with the LGBT community. A potential bright spot for gay rights in Tasmania. And a very unsurprising dark spot in Uganda.

Good news for lesbians! You gals are way in style this season. The gay marriage in "X-Men" is already going the way of most celebrity marriages. If you want gay friendly programming tune into the CW and not TBS apparently. Also you should watch Glee because it's very gay. Everyone's favorite middle school science teacher Bill Nye takes creationism to task.

And now that you have read all that we should tell you that internet addiction is really bad.