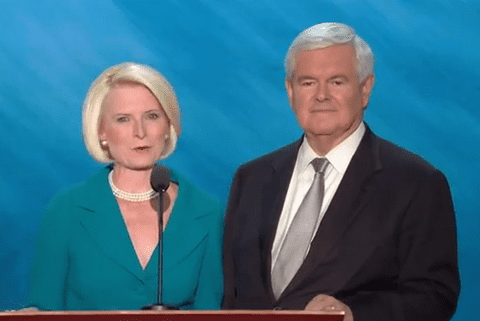 A tribute to Ronald Reagan set the stage for Newt and Callista Gingrich's joint appearance at the Republican National Convention tonight. And the late president's legacy was the meat of the message the couple hoped to send: Romney is Reagan to Obama's Jimmy Carter.

"The election of Mitt Romney and Paul Ryan will decisively move America to a better future. Remembering President Reagan reminds us that the choices we make matter, and this year is as important as the choice we made in 1980," said Callista, who traded off prepared remarks with her husband.

A few lines down, Gingrich led, "It's striking how President Carter and President Obama both took our nation down a path that in four years weakened America's confidence in itself and our hope for a better future," leaving Callista to finish the thought: "[Both] failed to produce results; both made promises they couldn't keep; and, as a consequence of ineffective policies, both were unable to revive our economy and create jobs."

Both Carter and Obama, they claimed, are the antithesis of Reagan's philosophy, a philosophy Romney will revive. "This is the most critical election of our lifetime," they said, as people do during election years. "Each of us must do our part now to ensure that America remains, in the tradition of President Reagan, a land of freedom, hope and opportunity."

Watch Callista and Newt Gingrich tag team AFTER THE JUMP.