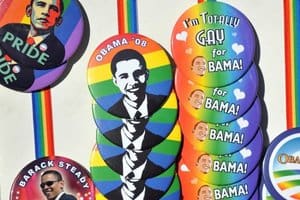 If President Obama thought coming out for marriage equality would clinch the LGBT vote, he thought wrong. A new poll shows support among self-identified LGBT voters has dropped by at least 6 points since 2008.

A new national poll of likely LGBT voters indicates that support for President Obama has dropped to 67 percent, a decline of at least six percentage points since 2008.

Gays and lesbians, same as all voters, are most concerned about the economy, jobs and unemployment, according to a Harris Interactive poll commissioned by Logo TV released on Aug. 21. Only nine percent of us rank “gay rights in general” as being most important, with marriage equality rated that way by a mere six percent.

While two-thirds of LGBT voters plan to vote to re-elect Obama, nearly 1-in-4 would be more likely to vote for Romney if he held the same positions as the president on same-sex marriage and other LGBT issues.

Previous Post: « Attendees At ‘Shiny’ Homocon There For Obama, Ron Paul
Next Post: Lesbians Are So In This Season, Says Style.com »