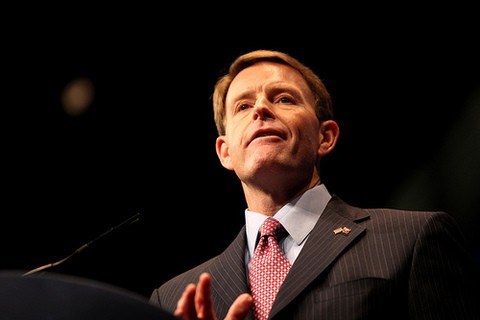 Rather than getting all hot and bothering writing a response to Tony Perkins' opportunistic claim that LGBT organizations share blame for the shooting at FRC's headquarters this week, Jeremy at Good As You simply reprinted Perkins' file from the GLAAD Commentator Accountability Project.

I've reprinted it AFTER THE JUMP as well, just in case you need a refresher.

From the GLAAD Commentator Accountability Project:

– Says about gay people: “They are intolerant. They are hateful. They are vile. They are spiteful…pawns of the enemy.” (See 0:43 mark.)

– Says that gay young people “have a higher propensity to depression or suicide because of that internal conflict; homosexuals may recognize intuitively that their same-sex attractions are abnormal.”

– Despite what health experts have said, insists that pedophilia is “a homosexual problem.”

– The Family Research Council has distributed a pamphlet that erroneously depicts gay men and lesbians as physically and mentally ill pedophiles who can be cured.

– Compares gay people to terrorists (at 0:31 mark): “[B]ack in the 80s and early 90s, I worked with the State Department in anti-terrorism and we trained about 50 different countries in defending against terrorism, and it’s, at its base, what terrorism is, it's a strike against the general populace simply to spread fear and intimidation so that they can disrupt and destabilize the system of government. That's what the homosexuals are doing here to the legal system.”

– "It doesn't matter what society does, I think within the homosexual, most of them know that this behavior, it's just not right, it's not what we were created to do and it's against God's plan and it's contrary to our nature and the way were were created."

– “The truth is that we cannot redefine marriage without opening the door to all manner of moral and social evil.”

– Called the It Gets Better project "disgusting," claiming it tells children "that it's okay to be immoral" and constitutes a "concerted effort to persuade kids that homosexuality is okay and actually to recruit them into that lifestyle."

– Paid $82,500 to use the phone bank of former Ku Klux Klan Grand Wizard David Duke for an election run-off.

– Claims "blood of young marines" is on hands of legislators who voted to repeal Don't Ask Don't Tell.

– Says "it's a fact" that homosexuality leads to "eternal damnation"

– Linked Secret Service prostitution scandal directly to open service: "[O]ver the weekend we saw the news of the President’s Secret Service detail in Colombia and the issue of them hiring prostitutes and now the White House is outraged about that. Actually in a meeting this morning my staff asked, ‘why should the President be upset’? It was actually legal; it was legal there to do that, so why should we be upset? Well, the fact is we intuitively know it’s wrong, there’s a moral law against that. The same is true for what the President has done to the military enforcing open homosexuality in our military. You can change the law but you can’t change the moral law that’s behind it. You can change the positive law, the law that is created by man, but you can’t change the moral law, it’s wrong. So what you have is you have a total breakdown and you can’t pick and choose. Morality is not a smorgasbord; you can’t pick what you want. I think you’re absolutely right, this is a fundamental issue going forward because if we say ‘let them do what we want,’ what’s next? You cannot maintain moral order if you are willing to allow a few things to slide."

– Says gays and lesbians are "held captive by the enemy"

– Claims his kids couldn't be gay because he is "teaching them the right ways that they are to interact as human beings" (3:15-3:39)

– Compared Mayor Bloomberg's proposed ban on supersized soft drinks to the "need" to ban homosexuality: "On one hand, he's happy to legislate people's food choices, using the dangers of obesity as justification. On the other, he not only promotes–but forces others to embrace–a sexual behavior that carries just as many public health risks. If that isn't hypocrisy, I don't know what is….On the "Today" show, Bloomberg reiterated that all he wants to do is improve life expectancy. If that's the case, then perhaps the Mayor should reconsider his endorsement of homosexuality, which, as Peter Sprigg explains, is one of the greatest public health hazards in America."

– Dedicated seven minutes of a recent radio should to framing scientifically-discredited "ex-gay" therapy as "successful," encouraging gays to "escape the homosexual lifestyle"

Previous Post: « Gay Couple Together For 51 Years Are Old Fashioned American Dream
Next Post: The OXD Mirror: New Music for 8.17.12 »