Life is a recurring nightmare for Colin Farrell in "Total Recall"

It's hard not to feel sympathy for Colin Farrell. His secret movie star weapon is those long, thick unmistakable eyebrows. When he's in distress his brow lifts and pulls them up into a converging point, creating a perfect triangular frame for big brown orbs of boyish angst. "Help me!" is written all over his eyes. That same furrowed brow expression with just minor flickering shifts can also say "Please love me!" and "Aren't I funny?" and "…"  His capacity for impish excitement and moral confusion were a perfect match for his best star turn to date in the hitman seriocomedy In Bruges (2008) and it helps the TOTAL RECALL do-over more than it should.

Farrell plays everyman Doug Quaid who doesn't realize he's actually someone else because his memory has been erased. A trip to the fantasy memory banks of "Total Rekall" (a reversal of Eternal Sunshine's "Lacuna Inc" since the company aims to give you false memories rather than take real ones away) upsets his reprogramming and suddenly he's killing soldiers with the trained might of a futuristic Jason Bourne. Returning home his formerly loving wife (Kate Beckinsale) tries to kill him. Quaid realizes he's completely lost in a false life with no memory of the real one. Cut to: plentiful moments of Farrell Furrowing!

But you shouldn't have time to think about the magic and mystery of physiognomy while you're watching an action movie. If you do your mind wanders and questions come cascading in like…

"When did Kate Beckinsale's Hair becomes self-aware like SkyNet?"

MORE QUESTIONS AFTER THE JUMP

… her locks are practically prehensile, whisking about expressively and frantically like they're after their own Oscar since the woman attached has long abandoned serious acting.

"Is the perpetually open mouthed Jessica Beal an actress or a CGI sex doll fantasy for adolescent boys and Justin Timberlake?" 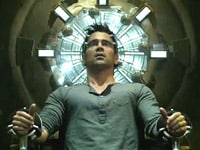 "Is Chris Nolan's Batman series responsible for the humorlessness of the current action crop or is self-seriousness a front for Hollywood – a way to feel important and mature without making any serious effort or having anything to say?" But I digress. No more questions.

Total Recall was directed by Len Wiseman, the man behind the undead Underworld series which also stars both his superhot wife Kate Beckinsale and the creepily gaunt mask of Bill Nighy in "dangerous person" mode. Nighy plays a "terrorist" leader though "terrorist" is a matter of semantics since the heroes in Total Recall are the rebel forces, out to free "The Colony" (Future Post-Apocalypse Australia) from enslavement by "The United Federation of Britain" (Future Post-Apocalypse UK). There is so much background plot the film is forced to begin with a short history lesson to get you caught up.

Wiseman makes the very odd choice of introducing us to Colin Farrell in all his half naked glory (I'm not complaining, just saying), the lightly haired chest, the gym physique, the low cut pajamas. He's so beautiful to look at that the film undermines its own nasty follow up plot point that this "everyman" couldn't have won a hot wife like Kate Beckinsale on his own so DUH, his life must be fake! Wiseman is either blind to Farrell's beauty or he's just bragging about his wife again. Or both.

To his credit though, Wiseman does have an eye for action. He lacks the imagination and verve of the genre's masters (Cameron, Bigelow, Spielberg, and very few others), and has trouble making chases, fist fights, and shoot outs feel individualistic but he can make them legible to the eye and intermittently exciting. That's sadly more than can be said for many action directors including those with much stronger critical reputations. The two best action setpieces in Total Recall both make use of sudden shifts in gravity in creative ways.  Total Recall has one or two flashes of inspiration in its visual effects and art direction (the audience laughed heartily at a shot of future money but I won't spoil that) but production designer Patrick Tatopoulous has seen as much of the eternally influential Blade Runner as everyone else.

The original Total Recall starring Arnold Schwarzenegger debuted in 1990 may have been dated upon arrival. It's always felt like a leftover 1980s sci-fi movie, filled with cheesy bombast, Ahnuld quips, latex grotesqueries and body count carnage comedy. The new Total Recall is less goofy all around (it stays on Earth for one) and less amused by the death of extras in crowded scenes but it's also significantly less fun and unlikely to incite anything like the original's fanbase. Farrell may have wasted a perfectly great performance on Fright Night (previously reviewed) which no one cared about or saw… and he feels committed to this one, too, though less cheerfully so. Among the central cast only Kate Beckinsale's Hair is having a good time! 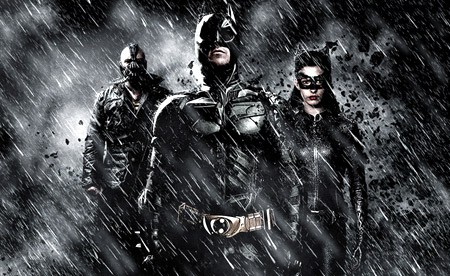 THE DARK KNIGHT RISES continues to dominate the box office though not at the level the Batfans surely hoped. Repeat business isn’t as easy to come by when a movie feels more like a solem duty than a rousing good time. The third and weakest installment of Nolan’s Dark Knight Trilogy has its moments but not nearly enough of them. It will have to settle for second place in the Box Office Derby of 2012 since there’s no topping The Avengers (previously reviewed). Nevertheless, if you’re as bored with NBC’s atrocious Olympics coverage as I am (I’m mystified by the notion that we’d rather watch Ryan Seacrest eat dinner or talk about Twitter than watch actual athletes doing their thing!), it’s a perfect weekend to hit the movie theater. The best things out there: BEASTS OF THE SOUTHERN WILD is the year’s surest (though hardly sure) Oscar hopeful…thus far at least; FAREWELL MY QUEEN (previously reviewed) is the best ignored movie out there and makes an amusing counterpoint to the Batman film; MOONRISE KINGDOM is evocative, funny, kitschy and moving enough to be Wes Anderson's best film since his masterpiece The Royal Tenenbaums; MAGIC MIKE (previously reviewed) lost half of its screens this weekend so stick another ten-er in its shiny pouch before its too late. It'll be zipping up and moving on soon. Know that you’re donating to good causes: — male nudity, Channing Tatum, Magic Mike sequels!