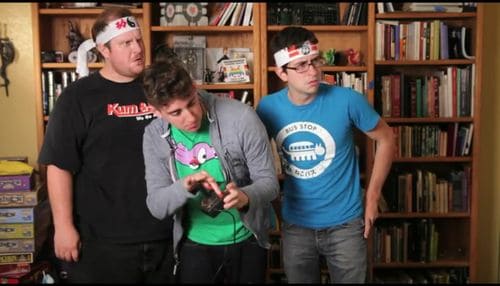 AFTER THE JUMP, check out the Kickstarter video for Gaymercon — the gathering meant to be the first-ever large-scale meetup of LGBT gamerfolk and their straight, geeky friends. (Note: The video scripted partially in semi-impenetrable Geekspeak. Please watch with Google at the ready.)

These guys look serious, and Gaymercon could be huge. There's considerable overlap between the 20-something gay male demo and the geek demo, and in some places there's almost no distinction at all. There was a moment in South Florida, seven or eight years ago, when being 23, male, gay, and sociable very nearly required one to be conversant with underground anime titles, and to know the basic mechanics of an X-Box controller. Most of those young guys and their geekfellows around the country are thirty now, and have travel budgets. And then some. In the first 24 hours of the Gaymercon Kickstarter fund-drive, donors gave Gaymercon more half of the $25,000 necessary to launch the conference next year.

In the last decade, videogame manufacturers have begun, very tentatively, to acknowledge the existence of a vast gaymer culture. Software companies BioWare and Bethesda have, for instance, created several hugely popular games in which players may choosing their characters' sexual orientations, and pursue in-game relationships accordingly. Inevitably, such inclusions have met with anger from game fan communities, and this instinctive dislike of even the barest hint of gayness has apparently frightened developers away from creating any explicitly, unalterably gay protagonists. Gaymers have lots of work to do.

Previous Post: « Movies: Colin Farrell Totally Recalls the 80s
Next Post: NEWS: Imperiled Love, A Fiddly Pastor, And The Loveliness Of The Moon From The Thames »