What a Tea Party take over of the Senate means: "Although divisive social issues have gotten little play this election
year with many Republicans running on job creation and a stagnant
economy, their election would usher in a majority that is just as
conservative socially as it is fiscally." 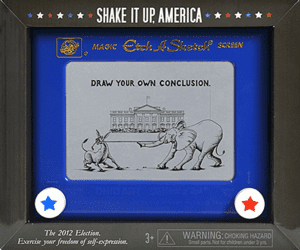 The Ohio Art Company is again capitalizing on the infamous "Romney is an Etch-a-Sketch" meme by releasing red and blue models of their famous product ahead of the election. The new tag line reads, "Exercise your freedom of expression".

Unfortunately for the GOP, their ideological followers continue partaking in racist activities.

Australian Gina Rinehart, the world's richest woman, told the "jealous" poor that they too can be rich – if they "spend less time drinking or smoking". That's offensive for a lot of different reasons.

ABC filed a story on the start of the Internet Cat Film Festival under "bizarre news". Me-ow!

On a related note: MTV has canceled Jersey Shore.

The Film Experience guest blogger Melanie Lynskey got out actor Zachary Quinto to reflect on Il Postino. Writes Quinto: "I found myself alone at one of the only art house movie theaters in
pittsburgh at the time. I was so enraptured by the experience. the
tenderness and intimacy of the story. The beauty of the landscape. the
powerful exploration of love. and in particular the performance of Massimo Troisi." 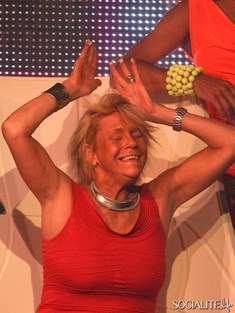 President Obama's "ask me anything" session briefly broke Reddit and brought us no closer to knowing the recipe for Obama's WH-made beer, though he claims the truth will be revealed soon. He did, however, suggest a constitutional amendment to overturn Citizens United, the Supreme Court decision that gave rise to super PACs that now have massive influence on electoral politics.

Has Lindsay Lohan convinced you yet that she can play Elizabeth Taylor? Maybe these shots from the set will help.

The hateful groups Focus on the Family and the Alliance Defense Fund have put together a list of recommendations for bullying legislation. Not surprisingly, it benefits their ideological ilk: one of their suggestions says bullying laws "should not apply to 'religious, political, philosophical, or other protected student speech'. So basically any motivation that yields homophobia.

A 30-pound baby loggerhead turtle was caught in Canarsie, Brooklyn. It will now be released in a different type of wild.

Brian Moylan tells you how to get laid at the Republican National Convention. If you're into that sort of thing.

Hunky GOP Rep. Aaron Schock thinks Paul Ryan needs to be shirtless more often. That's something on which we can probably all agree.

Commandant Gen. James Amos, the head of the U.S. Marine Corps, says there have been no problems since Don't Ask, Don't Tell's repeal. 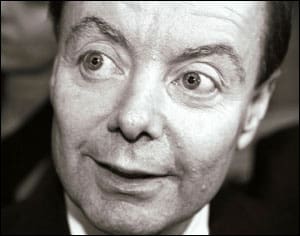 Former RNC Chairman Gary Bauer blasted Sen. Orrin Hatch for not supporting a constitutional amendment banning gay marriage. "The goal of the gay rights movement is to take a state that has same-sex
marriage and to use that state as a battering ram and a lawsuit before
the Supreme Court to force every state to have same sex marriage," he
said. "So I’m sorry that Orrin fell for it. But if only your side was
willing to allow each state to make the decision on their own. I think
Orrin Hatch may have had a bad moment or he forgets what’s happened in
the last 30 years — courts forcing radical social change on the
American people."

Adele did not have a secret wedding. Just an FYI.

Just yesterday I asked a friend, "Where is Winona Ryder?" Here she is!