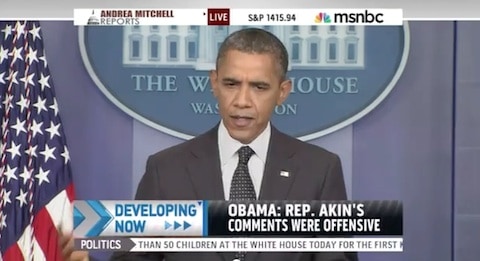 "Rape is rape. And the idea that we should be parsing and qualifying and slicing what types of rape we’re talking about doesn’t make sense to the American people and doesn’t make sense to me. What I think these comments do underscore is why we shouldn’t have a bunch of politicians – the majority of whom are men – making decisions about women’s health."

Meanwhile, the GOP seems to be turning against Akin, with even Romney suggesting that he should think about stepping down.

Previous Post: « Devout Christian Lisa Whelchel (Blair from ‘Facts of Life’) is on the Next ‘Survivor’: VIDEO
Next Post: Kathy Griffin Releases Dance Mix of Her Talk Show Theme ‘I’ll Say It’: LISTEN »