NYT columnist Frank Bruni talks to Bob Kerrey, the Nebraska Democrat who in 1996 as Senator made a politically perilous vote to oppose DOMA when others in his party refused to stand up to it. He's doing it again in 2012 in his revived bid for the U.S. Senate with a pitch for marriage equality he's not shy to discuss even if it might be politically inexpedient. 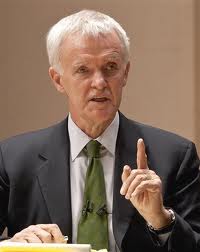 Gay marriage isn’t his primary issue. I just happened to hear that he was mentioning it frequently and gave him a call, during which he said that any commitment to social justice compelled advocacy of gay rights. He told me that he often asks voters: “Do you think anyone in his right mind would choose to be gay in Nebraska?”

After he agreed to continue our conversation in person, an aide e-mailed to say that an interview couldn’t be arranged. Kerrey overruled the aide.

Kerrey  insists it's because he doesn't want to be on the wrong side of history:

“What I usually say is, ‘Let me talk to you about the issue of homosexuality,’” Kerrey said over a drink here Saturday night. And then he indeed talks to voters about it, telling them that people are born the way they are and deserve a full complement of civil rights, including the right to marry. It’s that simple.

“People who are opposed to it are going to have to be explaining to their grandkids: why, why, why was that the rationale?” he said. “We’re going to be embarrassed in 25 years.”

Feel free to say thanks to Bob Kerrey here.

Previous Post: « What is a Real Man? — VIDEO
Next Post: Your Breakfast Recipe – Shirtless, of Course: VIDEO »