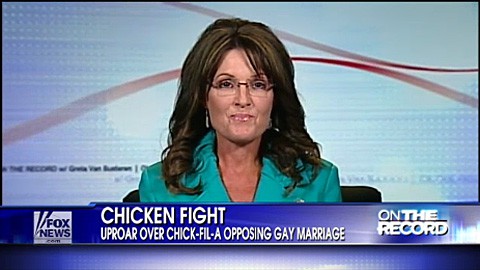 Sarah Palin turned up on Greta Van Susteren's 'On the Record' last night to talk about her support for Chick-fil-A, gay marriage, and Dick Cheney calling McCain's choice of her as running mate a "mistake". 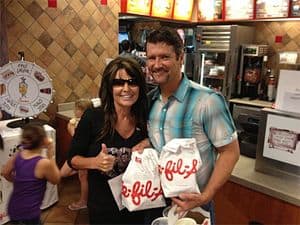 Well, that calling for the boycott is a real — has a chilling effect on our 1st Amendment rights. And the owner of the Chick-fil-A business had merely voiced his personal opinion about supporting traditional definition of marriage, one boy, one girl, falling in love, getting married. And having voiced support for kind of that cornerstone of all civilization and all religions since the beginning of time, he then basically getting crucified.

I'm speaking up for him and his 1st Amendment rights and anybody else who would wish to express their not anti-gay people sentiment, but their support of traditional marriage, which President Obama and Joe Biden, they both supported the exact same thing until just a few months ago, when Obama had to flip-flop to shore up the homosexual voter base.

…anybody who is a protection — somebody who wants to protect our Constitution, all of our constitutional rights, including that freedom of speech, should speak out on behalf of this individual, whose business is being harmed by those who are intolerant and are bigoted and are hypocritical because they don't agree with this man's personal opinion and the sentiment that he shared and they want to see him shut down and shut out of some communities.
That is the most narrow-minded and intolerant view that they can take, very hypocritical. So those who protect the Constitution, all of our rights, I would think, would stand up and be proud Americans and say, Thank God we have our 1st Amendment rights.

Later Greta asked her about states' rights and gay marriage:

I personally would love to see a national dialogue about what will America continue to define as marriage….And if you see, Greta, and pay attention to where the states have gone with this particular issue and the votes of the people, overwhelmingly, the people within the states have said they want to continue to define marriage as one man and one woman, as the Muslims do, orthodox Jews do, non- denominational Christians do, faith-practicing Catholics do. It truly is a cornerstone of religion and civilization.