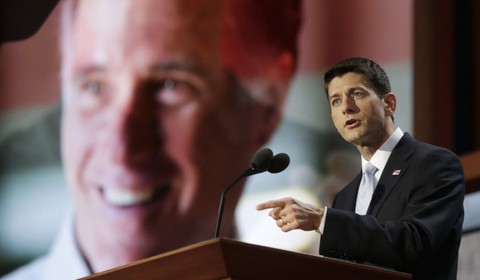 Wisconsin Gov. Paul Ryan officially accepted the Republican Party’s vice presidential nomination. As part of his celebratory, self-laudatory speech, Ryan explained to the crowd that despite his and running mate Mitt Romney’s age, they make it work; he hammered President Obama on alleged domestic inaction; and he celebrated about his mother, Betty, a stand-in during this campaign for all people, particularly women, of retirement age.

The biggest applause line, however, was most likely this one, delivered toward the end of the speech, when he claimed American rights are moral rights given to us by God:

Each of these great moral ideas is essential to democratic government – to the rule of law, to life in a humane and decent society. They are the moral creed of our country, as powerful in our time, as on the day of America’s founding. They are self-evident and unchanging, and sometimes, even presidents need reminding, that our rights come from nature and God, not from government.

I’ve included a clip of that bit AFTER THE JUMP, as well as longer footage of Ryan’s entire RNC speech.