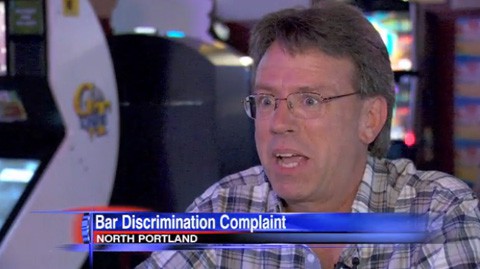 Portland, Oregon bar owner Chris Penner is defending himself from discrimination complaints from a customer who claims Penner told him and his companions to stay away because his business, the P Club, was beginning to get the reputation of being a "tranny" or gay bar.

The BOLI complaint said Penner’s first voicemail said "I am going to have to ask for you and your group not to come back on Friday nights. I really don't like having to do that but unfortunately it's the area we are in and it's hurting business a lot."

In the second voice message, the complaint states Penner said "I've done some investigating why my sales are declining and there's two things I keep hearing: people think that a) we're a tranny (trans-sexual) bar or b) we're a gay bar. We are neither. People are not coming in because they just don't want to be there on a Friday night now."

Penner denies the allegations, saying that he welcomes all customers, and has a staff which is half gay and lesbian. "It’s not true,” Penner said. “We're not a homophobic bar by any means."