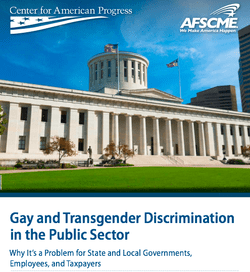 The Center for American Progress and the American Federation of State County and Municipal Employees today released a joint study examining the trials and tribulations LGBT Americans face in the public sector work place.

According to their findings, only 43% of LGBT state employees work in a state protecting gays and lesbians from on-the-job discrimination. Only 31% work in a state where gender identity is included in protections.

"This means that the majority of Americans working for state governments still do not have statutory protections against discrimination based on sexual orientation and gender identity," they say.

In addition to examining the legal aspects of these equality gaps, the study looks at something less political: dollars and cents. A taste of the survey's findings:

These socioeconomic disparities are often the direct result of workplace discrimination.
…
Failure to retain qualified employees introduces significant costs, not the least of which are the costs associated with replacing the departing employees. It costs anywhere between $5,000 and $10,000 to replace a departing hourly worker and between an estimated $75,000 and $211,000 to replace an executive-level employee.

Here is a
PDF of the entire study.