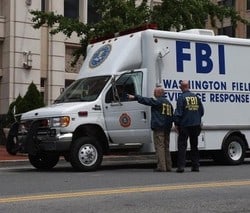 Rejecting Perkins' suggestion that his LGBT opponents bear some responsibility, TWO executive director Wayne Besen said in a statement that "the LGBT community knows all too well the devastating consequences of violence."

"Lesbian, gay, bisexual, and trans people are harassed, threatened, intimidated, beaten, and killed on a daily basis in violent acts of hatred all over the world, simply because of who they are and who they love," he said. "That is why — yesterday, today, and every day — we stand squarely against violence in all its forms, because violence is never a way to resolve political differences or settle disputes."

"[Perkins] expressed appreciation for the LGBT community's swift repudiation of violence but asked us to go further and disavow FRC's hate-group designation. Truth Wins Out cannot do that," the equality activist insisted.

[FRC] says that gays are deviants and pedophiles, strongly promotes fraudulent 'pray-away-the-gay' therapy, calls for the imprisonment of gay people, and says that homosexuality is destructive to society. Perkins cannot be allowed to exploit the sympathy rightfully generated by this inexcusable crime to whitewash his group's ongoing anti-gay activities. If the FRC wants to stop being labeled a hate group, it must stop doing and saying hateful things.

TWO Director of Communications John Becker also rejected Perkins' perspective, saying that insisted that "yesterday's senseless act of violence does not exonerate the Family Research Council and other anti-gay hate groups from the decades they've spent slandering, demonizing, and actively lying about the LGBT community."