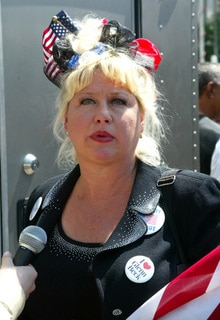 Former Saturday Night Live star and current conservative fundamentalist Victoria Jackson was of course at the Republican National Convention in Tampa, which where Sirius radio host Michelangelo Signorile ran into her and asked the Tea Partier to sound of on Todd "legitimate rape" Akin.

You can be sure Jackson, a woman who thinks all Muslims are terrorists and describes gay kisses as "sickening", had plenty to say.

"The Todd Akin thing was so blown out of proportion — it's a joke," she said. "How many times do people get pregnant from rape? It's point zero zero one percent. It's a joke.

She went on: "I read lots of articles. I know people, because I'm 53. I've know a lot of people, and I've actually never known anyone who got pregnant from being raped."

Jackson also said that if she got pregnant from a rape, she would have the baby.

I think that God can turn a bad thing into a good thing. And that, if I got raped and a beautiful baby who was innocent was born out of it, that would be a blessing. The DNA of a baby is individual. It's not the mother's DNA. It's not the father's DNA. And that's why I believe abortion is murder, because it's not the woman's body. It has it's own DNA. If there's a boy baby inside of me, he has a penis. That's not my body.

Signorile later asked Jackson to respond to former friend Dan Steadman's public claim that Jackson turned her back on him because he's gay. "I love my gay friends," she told Signorile. "My best friends who are gay, I've actually never seen them with a boyfriend. It's like — we've never talked about sex. I don't think people should identify themselves by their sexual life. My identity is in Christ… But I don't think people should make their identity about their sex life. That should be private."

Would it be inappropriate to point out here that it was a self-professed "normally sexed" person, Karl-Maria Kertbeny, who first used the word "homosexual" in print, forever making sex part of straight and LGBT people's identities alike?

Previous Post: « Right Attacks ‘ParaNorman’ For Featuring Likeable Gay Jock
Next Post: Today on Towleroad: Eastwood Sticks It to a Chair and More »