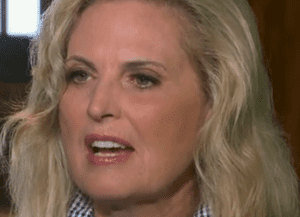 In a Friday interview with Iowan television station KWQC, Ann Romney declined three times to state her position on marriage equality. And she declined in the most dismissive possible way, insisting that the question of lesbian mothers' ability to wed isn't important to Americans — an assertion with the unavoidable subtext that either lesbian mothers and their friends and families don't qualify as Americans, or else that lesbian mothers and their friends and families don't care much about marriage. Cruel or presumptuous: take your pick.

The full transcript is available at KWQC. Here are some excerpts:

Anchor David Nelson:
"Here in Iowa, as you know, same-sex marriage is legal.  Do you believe
a lesbian mother should be allowed to marry her partner?"

Ann Romney:
"You know, I'm not going to talk about the specific issues.  I'm going
to let my husband speak on issues.  I'm here to really just talk about
my husband and what kind of husband and father he is and, you know,
those are hot-button issues that distract from what the real voting
issue is going to be at this election.  That, it's going to be about the
economy and jobs.

And, frankly, the President said four years
ago that if he doesn't turn this economy around he's going to be looking
at a one-term presidency.  And I frankly believe that Mitt is the
person that is so going to be focused on jobs and job creation and
making sure that women's economic prosperity is more certain …

Anchor David Nelson: "Do you believe that employer-provided health insurance should be required to cover birth control?"

Anchor David Nelson:
"Well, a Pew Research poll shows those issues are very important to
women, ranking them either "important" or "very important."

Ann Romney:
"You know, but I personally believe, and this is what I'm hearing from
women all across the country that they are going to look for the guy
that's going to pull them out of the weeds and get them job security and
a brighter future for their children.  That's the message.

Lsten, I've been across this country, I've
been for a year-and-a-half on the campaign trail.  I've spoken with
thousands of women and they are telling me, they're telling me a couple
of things, one they say they're praying for me which is really
wonderful, and then they're saying, ‘please help, please help.  We are
so worried about our jobs.'
So really if you want to try to pull me off
of the other messages it's not going to work because I know because I've
been out there."

Anchor David Nelson:
"Well, I don't want to pull you off any message.  You just told a
reporter who was questioning you in Cleveland that you want women to
have a secure and stable future.  I asked you about marriage and whether
lesbian mothers should be allowed to marry.  Isn't marriage a part of
creating a stable future?"

Ann Romney:
"You know, again, I'm going to talk to you about the economy and about
job creation and about how my husband is the right person for the right
time.  This is going to be an election that is very important for women,
and we are going to make sure that their economic prosperity is more
certain under a President Romney."