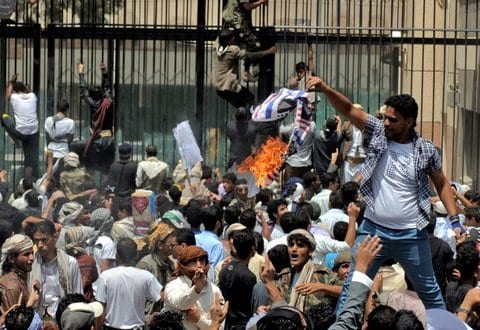 Two days after U.S. Ambassador Chris Stevens and three other Americans were killed in an attack on the States' Embassy in Libya, hundreds of protesters stormed a U.S. satellite office in Sana, Yemen. Thankfully it was not as deadly as the Libya attack, but it was just as fierce:

The protesters breached the usually tight security around the embassy and reached the compound grounds but did not enter the main building housing the offices. Once inside the compound, they brought down the U.S. flag, burned it and replaced it with a black banner bearing Islam’s declaration of faith — "There is no God but Allah."

Before storming the grounds, demonstrators removed the embassy’s sign on the outer wall, set tires ablaze and pelted the compound with rocks.

The Boston Globe notes that Yemen is fertile ground for al-Qaeda, the terrorist group that claims to have coordinated the attacks earlier this week. All of the attacks are reportedly inspired by an anti-Muslim film that portrays Mohammed as a womanizer, among other things, but the identity of the intentionally offensive video's actual creator remains a mystery. Whomever it is may have wanted just this reaction.