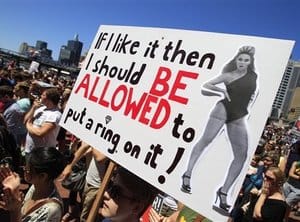 Less than 24 hours after the Australian House of Representatives rejected a federal marriage equality bill, the nation's Senate did the same with a 41 to 26 vote.

One of the lawmakers who voted for marriage, Liberal senator Sue Boyce, later read the riot act to her colleagues, insisting that same-sex couples deserve marriage because, shocker, "gay people are just people."

On the other end of the ideological spectrum, opposing Sen. John Madigan claimed equality supporters were unfairly smearing people like him:

Democratic Labor Party Senator John Madigan said he was appalled at the vilification of MPs who opposed the change.

"Under the guise of compassion for the desire of same-sex couples, we have endured a non-stop campaign of denigration against those who have refused to buckle under the weight of an attack designed to pour scorn and guilt on those who have the temerity to refuse to deny their principles," he said.

Senator Madigan said if the argument for same-sex marriage was based on love, respect, dignity and equality, those advocating the legislation needed to practice what they preached.

He said love should not be the basis for any legislative change.

"Nowhere in the Marriage Act is the word love even mentioned," he said.

Madigan said the state needs to regulate marriages, because it is "a partnership with social consequences."

"Marriage is less about the rights of the adult than about the rights and responsibilities those adults have towards the children of the relationship," he said. Perhaps people who don't plan on having children should be barred from tying the knot as well, then?