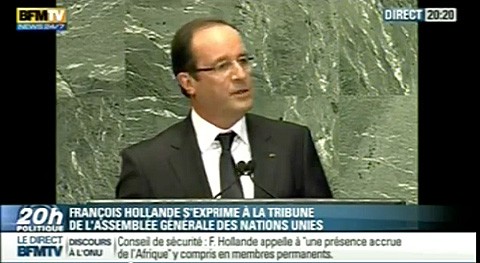 French President François Hollande yesterday made an historic speech to the UN General Assembly, calling on the body to reject the criminalization of homosexuality around the world.

Hollande told those assembled that France would lead the way in an honorable fight for universal human freedoms:

Said Hollande: “France will continue to engage in all these struggles: for the abolition of the death penalty, for women’s rights to equality and dignity, for the universal decriminalization of homosexuality, which should not be recognised as a crime but, on the contrary, recognized as a [sexual] orientation.

He added:”‘All members countries have the obligation to guarantee the security of their citizens, and if one nation adheres to this obligation, it is then imperative that we, the United Nations, facilitate the necessary means to make that guarantee. These are the issues that France will lead and defend in the United Nations. I say this with seriousness. When there is paralysis… and inaction, then injustice and intolerance can find their place.”

Watch an excerpt of Hollande’s speech, AFTER THE JUMP…

Looking for a longer version, with translation. If I find it, I’ll swap out.