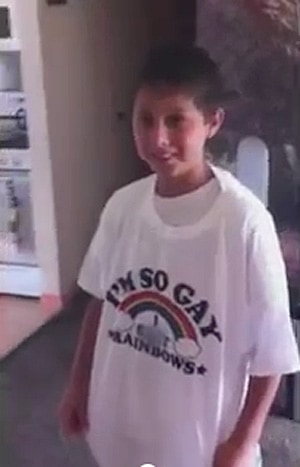 Jimmy Kimmel broadcast his latest 'let's play tricks on the kids' stunt last night, which involved asking parents to give their kids the most horrible first day of school outfit ever.

At least one of the parents thought putting their kid in an "I'm So Gay" t-shirt would be hilariously humiliating. Kimmel's producers agreed enough to include it in the gag reel. Is the point here that it would be "horrible" for the kid because so many are bullied for being gay, or are gays the actual punchline? The point here would seem to be the latter, but maybe watching too many anti-bullying videos has made me lose my sense of humor.