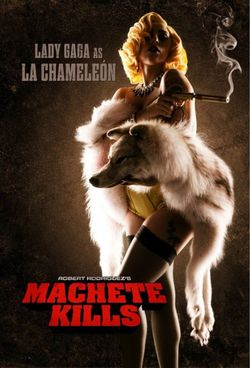 Earlier this summer, Andy began chronicling the growing animosity between PETA and Lady Gaga, after the songstress appeared in a b-movie promo poster dressed in what looked like a wolf carcass. At the time, PETA vice president Dan Matthews warned Gaga: "… you're making yourself a target just like the mindless Kim Kardashian." (Kardashian had recently been flour-bombed by a PETA activist.)

Gaga, it appears, doesn't much care: She was spotted and photographed wandering around Cologne this week wearing what looked like the carcass of an arctic fox.

Though I cannot find the post, ABCNews notes that Gaga has posted this message to her website:

I am choosing not to comment on whether or
not the furs I purchase are faux fur-pile or real because I would think
it hypercritical not to acknowledge the python, ostrich, cow hide,
leather, lamb, alligator, 'Kermit' and not to mention meat, that I have
already worn.

You see a carcass, I see a museum pièce de résistance.

In 2009, Lady Gaga appeared on Ellen and described and condemned the wearing of fur:

Ellen
DeGeneres quickly turned the conversation to fashion with Lady Gaga
running down a list of her costume and hat designers … One costume that has been
dubbed the Kermit The Frog outfit was made by designer Jean de
Castelbajac, and looks like a bunch of Kermit The Frog puppets glued
together to make a top. Lady Gaga told Ellen DeGeneres, "I really loved
that one in particular because I thought it was a commentary on not
wearing fur, 'cause I hate fur and I don't wear fur.