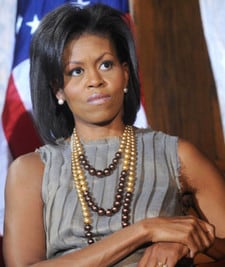 In addition to opening the Democratic National Convention this evening, First Lady Michelle Obama will appear at an event for equality allies in Charlotte this week.

Gay Politics offers the details on hosts and guests:

The sold-out event is jointly sponsored by the Gay & Lesbian Victory Fund and the Human Rights Campaign, along with partners including the National Stonewall Democrats and local LGBT political organizations.

An estimated 600 people are expected to attend the event.