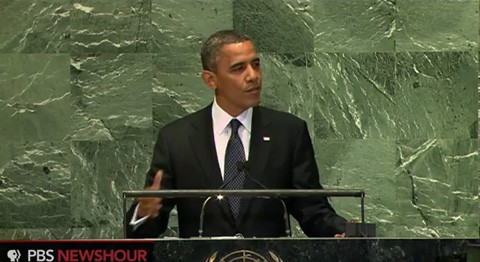 President Obama spoke to the 67th UN General Assembly today and opened his speech by recognizing slain Ambassador Chris Stevens and his colleagues, building his speech around the attacks on Stevens and what they mean with regard to freedom around the world, and referencing the video created to stir up anti-American extremists.

Here's part of the speech which you can watch in full, AFTER THE JUMP:

Now, I have made it clear that the United States government had nothing to do with this video, and I believe its message must be rejected by all who respect our common humanity.

It is an insult not only to Muslims, but to America as well — for as the city outside these walls makes clear, we are a country that has welcomed people of every race and every faith. We are home to Muslims who worship across our country. We not only respect the freedom of religion, we have laws that protect individuals from being harmed because of how they look or what they believe. We understand why people take offense to this video because millions of our citizens are among them.

I know there are some who ask why we don’t just ban such a video. And the answer is enshrined in our laws: Our Constitution protects the right to practice free speech.

Here in the United States, countless publications provoke offense. Like me, the majority of Americans are Christian, and yet we do not ban blasphemy against our most sacred beliefs. As President of our country and Commander-in-Chief of our military, I accept that people are going to call me awful things every day — (laughter) — and I will always defend their right to do so. (Applause.)

Americans have fought and died around the globe to protect the right of all people to express their views, even views that we profoundly disagree with. We do not do so because we support hateful speech, but because our founders understood that without such protections, the capacity of each individual to express their own views and practice their own faith may be threatened. We do so because in a diverse society, efforts to restrict speech can quickly become a tool to silence critics and oppress minorities.

We do so because given the power of faith in our lives, and the passion that religious differences can inflame, the strongest weapon against hateful speech is not repression; it is more speech — the voices of tolerance that rally against bigotry and blasphemy, and lift up the values of understanding and mutual respect.

Now, I know that not all countries in this body share this particular understanding of the protection of free speech. We recognize that. But in 2012, at a time when anyone with a cell phone can spread offensive views around the world with the click of a button, the notion that we can control the flow of information is obsolete. The question, then, is how do we respond?

And on this we must agree: There is no speech that justifies mindless violence. (Applause.) There are no words that excuse the killing of innocents. There’s no video that justifies an attack on an embassy. There’s no slander that provides an excuse for people to burn a restaurant in Lebanon, or destroy a school in Tunis, or cause death and destruction in Pakistan.

Previous Post: « Ke$ha Wants to Make the Most of the Night Like We’re Gonna Die Young: VIDEO
Next Post: Barbra Streisand Plays Seth Rogen’s Mom in ‘The Guilt Trip’: VIDEO »