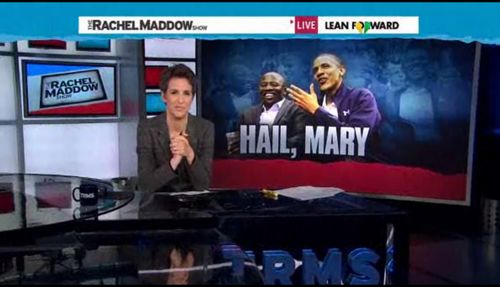 Jerome Corsi, a slavering paranoiac who could be mistaken for a serious journalist only in the bizarro universe of World Net Daily, became famous for insisting that Barack Obama is a secret foreigner. The stance became difficult to maintain after the president released his long-form birth certificate last year, and Corsi had to find a new schtick. Which he did. Barack Obama, Corsi has discovered, is a secret gay.

This is the sort of thing Rachel Maddow loves. No need to invent crazy rightwing strawmen with guys like Corsi roaming the web. AFTER THE JUMP, see Maddow's gleeful discussion of Corsi's … theory? hypothesis? fantasy? What's the word, here?