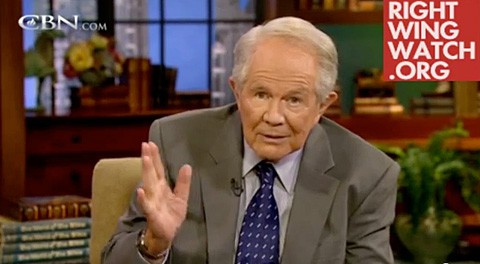 On The 700 Club, Pat Robertson responds to a letter from a man who says that his wife is disrespectful and insults him.

Right Wing Watch captured the video, the last portion of which was edited out on the CBN website.

“Well, you could become a Muslim and you could beat her,” Robertson responded. “This man’s got to stand up to her and he can’t let her get away with this stuff,” Robertson continued, “I don’t think we condone wife-beating these days but something has got to be done.”

He later said the woman is a “rebellious child” and pondered if she has psychological problems. Robertson told the viewer that since he “can’t divorce her according to the Scripture, so I say: move to Saudi Arabia.”