In this Boston Globe article, Julie Goodridge, one of the plaintiffs in the landmark 2004 Massachusetts gay marriage case, describes a meeting she and the other plaintiffs had with then Governor Mitt Romney, who had endorsed a constitutional ban on same-sex marriage. 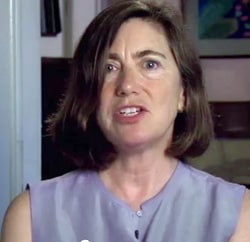 Goodridge spoke about the meeting in a video over the summer for the "Mitt Gets Worse" campaign, but the Boston Spirit article goes much deeper into Romney's complete lack of empathy, and Romney's other interactions with LGBT groups and people during his time as governor.

“I didn’t know you had families,” remarked Romney to the group, according to Wilson.

The offhanded remark underscored that Romney, the governor of the first state prepared to grant same-sex marriage, hadn’t taken the time to look at what the landmark case was really about. By this point the plaintiff’s stories had been widely covered by national media — in particular, Julie Goodridge’s heartrending tale of how her then-partner, Hillary, was denied hospital visitation following the precarious birth of daughter Annie. It was the ignorance of these facts — and Romney’s inaccurate, insensitive answer to her parting question, that pushed Julie Goodridge to her breaking point.

“I looked him in the eye as we were leaving,” recalls Goodridge. “And I said, ‘Governor Romney, tell me — what would you suggest I say to my 8 year-old daughter about why her mommy and her ma can’t get married because you, the governor of her state, are going to block our marriage?’”

His response, according to Goodridge: “I don’t really care what you tell your adopted daughter. Why don’t you just tell her the same thing you’ve been telling her the last eight years.”

Romney’s retort enraged a speechless Goodridge; he didn’t care, and by referring to her biological daughter as “adopted,” it was clear he hadn’t even been listening. By the time she was back in the hallway, she was reduced to tears.

“I really kind of lost it,” says Goodridge. “I’ve never stood before someone who had no capacity for empathy. It went behind flat affect. It was a complete lack of ability or motivation to understand other people.”

While Goodridge cried, Romney brought the press into his office to give his take on the meeting.

He described it as, “Pleasant.”

Make sure you read the rest of the article HERE.

If you haven't watched Goodridge's video, which I posted it earlier this year, I've reposted it, AFTER THE JUMP…

Previous Post: « DOJ Asks Supreme Court to Consider Two More DOMA Cases
Next Post: Why are Gay Men So Judgmental Toward One Another? – VIDEO »