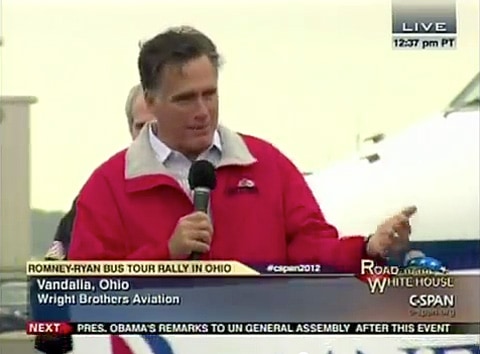 Earlier today, Mitt Romney interrupted supporters chanting "Ryan" at a Vandalia, Ohio campaign stop to remind them that there's somebody else on the ticket.

Also today, Romney undermined his own claim that Obama raised taxes on small businesses and middle class Americans during his first term by telling one crowd the opposite (keep your eye on Ryan's expression):

His idea now. He’s got one new, one new idea. I admit this, he has one thing he did not do in his first four years, said he’s going to do in his next four years, which is to raise taxes. And is there anybody who thinks that raising taxes will help grow the economy?

The Romney campaign later tried to do some fixing up: “President Obama has raised taxes on millions of middle-class Americans during his first term in office,” said spokeswoman Amanda Henneberg. “Governor Romney was clearly communicating about an additional tax increase President Obama is proposing on American small businesses that will jeopardize over 700,000 jobs.”

Previous Post: « Towleroad Talking Points: Cam vs. Mitch and Romney on Airplanes
Next Post: Hubble Releases ‘Extreme’ Look Back into the Universe: VIDEO »