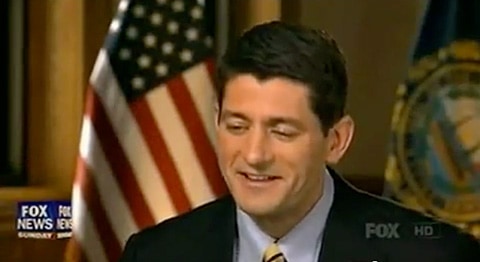 Pressed on how mathematically the Romney-Ryan tax plan would lower taxpayer bills by 20 percent without costing anything, Paul Ryan tells FOX News Sunday's Chris Wallace: “I don’t have the … It would take me too long to go through all of the math."

Mitt Romney and Paul Ryan are understandably reluctant to explain the specifics their tax plan, because then they'd have to admit that it is mathematically impossible for them to institute their proposed cuts for the rich without raising the middle-class's tax burden.

Ryan is straight-up using his reputation as the Republican party's big budget wonk to get out of giving direct answers to any actual budget wonking questions. Because from his point of view, "I don't want to get too wonky" or "I don't have the time" are more palatable answers than "if I gave you details you'd see that I've been lying."