Scott Brown's campaign issued a statement late yesterday about the racist behavior by his staffers this week: 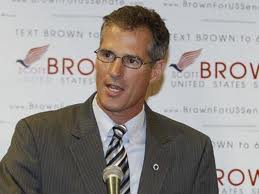 “Senator Brown has spoken to his entire staff – including the individuals involved in this unacceptable behavior – and issued them their one and only warning that this type of conduct will not be tolerated. As we enter the final stretch of this campaign, emotions are running high, and while Senator Brown can’t control everyone, he is encouraging both sides to act with respect. He regrets that members of his staff did not live up to the high standards that the people of Massachusetts expect and deserve.”

Brown's staffers were seen making Native American 'war whoops' and tomahawk chops in a YouTube video in a face-off with Elizabeth Warren reporters in response to claims made by Brown that she checked a 'Native American' box on a job application to advance herself.

Meanwhile, Brown denied suggesting in his debate that he could tell someone's ethnicity by looking at them.

Here's what he said in the debate: "Professor Warren claimed that she was a Native American, a person of color, and as you can see, she's not."

REPORTER: … the debate that, "As you can see," she's not Indian. Can
you tell by looking at someone what their ethnicity is? What's your
feeling on that?

REPORTER: But you're suggesting you can tell by somebody's—

BROWN: I never made that suggestion at all.