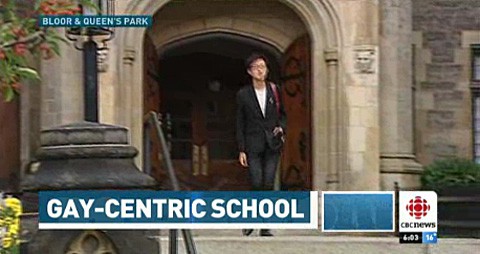 Fan Wu, 20, a university student who said he experienced a kind of "covert bullying" in school because he could not speak about his sexuality, has proposed a 'gay-centric' high school in Toronto, and a public meeting (though closed to media) was held about it Wednesday, the CBC reports:

Irene Miller, president of the Toronto chapter of Parents, Families and Friends of Lesbians and Gays (PFLAG), says separating kids because of their sexual orientation won't help encourage acceptance. "What you're doing is saying: 'If we take away all the kids who are being bullied, then the bullying stops,'" Miller said. "What we should be doing is take away all the bullies and the bullying will stop. It's the wrong end of the stick."

"So we would welcome allies, straight people, lesbian, gay, bi, trans, people of all sorts into this school. There is no ghettoization going on here."

Watch the CBC's report and interview with Wu, AFTER THE JUMP…

Previous Post: « Scott Brown ‘Regrets’ Racist Behavior of His Staff, But Won’t Acknowledge His Own
Next Post: Rachel Maddow Rips Romney Over His Lying Ads: VIDEO »