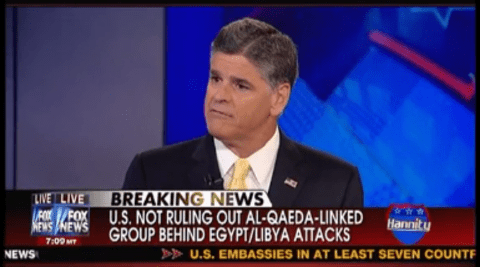 In a conversation with conservative pundit Ann Coulter about the attacks on U.S. Embassies in Libya and Egypt, Fox News host Sean Hannity said that President Obama’s response, predictably described as an “apology,” makes the commander-in-chief look like a “wimp”. He does not say, however, that the response he and Coulter are discussing in fact came from embassy officials in Cairo.

Coulter, meanwhile, pooh-poohed reports that an anti-Muslim video sparked the protests; rather, she thinks they were inspired by 9/11 and by the Arab Spring, which she thinks we need to go back in time to stop. She also claims that President Obama’s support for the “riot-like” Arab Spring shows he’s “utterly naive on foreign policy”.

Watch the video of the blatant falsehoods and casual heterosexism, via Mediaite,
AFTER THE JUMP…