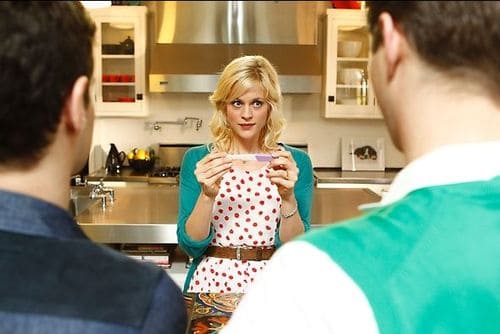 John Weltman is the president and founder of Circle Surrogacy and an expert in assisted reproductive technology law. He and his husband are the fathers of two sons, 18 and 17, through surrogacy.  They were the first in America to have two children through surrogacy, one for each dad through the same surrogate mom.

Television has come a long way in representing gay characters. In May, Joe Biden said, in discussing marriage equality, that “Will & Grace probably did more to educate the American public than almost anybody’s ever done so far.”

NBC’s The New Normal, which premiered last night, is the next chapter. The storyline focuses on gay characters becoming parents through surrogacy.

The subject is close to my heart. After seventeen years of helping parents have children through surrogacy, I can tell you that the show gets some things right. And it gets some things very wrong.

In the pilot, we meet David, a football-watching doctor, and Bryan, his fashion-obsessed partner, who want to have a baby. Let’s leave aside discussion of hackneyed gay stereotypes. More dangerously, Bryan’s fondness for nice things is likened to his desire to have a child. “Oh my God, that is the cutest thing I’ve ever seen,” he gasps at a baby at the mall. “I must have it.” 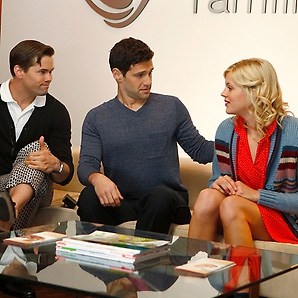 Okay, it’s a sitcom and Bryan has some of the funniest lines. But no couple, gay or straight, considers surrogacy because they want “to have baby clothes. And a baby to wear them.” Becoming parents is the biggest step a couple can take together. It requires thoughtful consideration and contemplation.  Anyone who told me they wanted to have a baby for their clothes would be shown the door!

Here’s where The New Normal gets things right: the episode opens on a misty-eyed Bryan speaking to his future child: “This video is to show you … how desperately you were wanted.”

Those who choose surrogacy do so because they want, more than anything, to have a child. Whether they are an infertile straight couple, or a gay couple who have gathered resources for years, there is no question that surrogacy is not something you take lightly. When contrasted with the way generations of parents in Goldie’s family have had children by accident, those who pursue surrogacy for the right reasons will make some of the best parents—in part because it requires such careful thought and planning.

In the episode, we learn of a simple process of clicking though the “stunning models” in the “platinum” egg donor database and creating a perfect embryo to be implanted into a surrogate. Bryan wants to know if it’s extra for a “skinny blond child who doesn’t cry.”

Again, it’s a sitcom and it relies on tired humor. In doing so, however, it dehumanizes surrogacy and egg donation. Let’s set the record straight. The process by which surrogates, egg donors, and intended parents choose to work together occurs after meticulous consideration of a variety of factors.

Women apply to become surrogates by answering questions about their personal and medical history, what they are looking for in intended parents, what their views are on medical issues, and why they are considering surrogacy. They speak with social workers and partake in screenings. Legal experts weigh in. A match is ultimately a two-way street, with surrogates and egg donors, deciding with intended parents that they want to move forward.

When the agency representative asks David and Bryan who is going to be the bio dad, both respond, “I am.” Advances in IVF technology allow us to divide eggs between two potential sperm providers and implant two embryos, one from each  gay dads, so that each man can become a biological father of half siblings at the same time.  Other times, gay couples have one child through surrogacy, and then have a second child through surrogacy using the other father’s sperm.

Whatever the outcome, gay couples who become parents through surrogacy are finding that Bryan’s epiphany rings true: not having a biological tie to a child doesn’t make you any less of a father.

The second episode airs tonight at 9:30 ET. Look forward to another post responding to surrogacy issues raised in future episodes.

Previous Post: « Ann Romney Booked to Speak at Family Research Council’s ‘Values Voter Summit’
Next Post: The Scissor Sisters ‘Have a Kiki’ on the Premiere of ‘The Wendy Williams Show’: VIDEO »