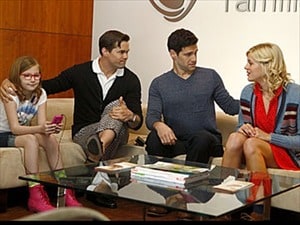 NBC's sitcom, The New Normal tells the story of a well-to-do gay couple that starts a family through a surrogate. The show wants to be sassy (it co-stars NeNe Leakes, an Atlanta 'Real Housewife'), heartwarming (co-stars Georgia King, the surrogate named Goldie, and her wise-beyond-her-years daughter, Bebe Wood, are nothing if not entirely adorable and the objects of our sympathy and affection), and reflective of our post-gay world (Justin Bartha and Andrew Rannells play partners David and Bryan who are in love and filled with pre-parental angst, just like every other couple expecting a child). It also shines a bright light onto a legal world where increasing importance is belied by byzantine complexity.

The law of surrogacy — and, specifically, the law of gay surrogacy — implicates family law, tax law, and constitutional law. And although these topics may not be at the forefront of the mind of creator Ryan Murphy, his show has the chance to go beyond the admittedly essential task of normalizing gay characters in our public culture. It could show viewers the horrors of everyday discrimination, the ways anti-gay laws stand in the way of love and family, and the irrationality of second-class citizenship.

The pilot starts that project, but it's anyone's guess whether The New Normal will deal with its legal issues (not to mention its social, economic, racial, generational, gender and other issues) with the seriousness they deserve. Still, the pilot raises questions that those of us interested in LGBT family law must explore. To do that, I reached out to my incomparably smart colleague, Richard Vaughn, founder of the International Fertility Law Group and one of the few lawyers in this country focusing on gay surrogacy issues. I recommend you read his blog on these issues, available here. He has lectured extensively (including in my classes) and he and his husband used a surrogate to start a family of their own. Therefore, he can speak to these issues from an intellectual and practical perspective.

AFTER THE JUMP, I analyze The New Normal pilot from a legal perspective, highlight the legal questions it raises, and work with Mr. Vaughn to provide context, answers, and even more questions.

There is fodder for lots of commentary about The New Normal. 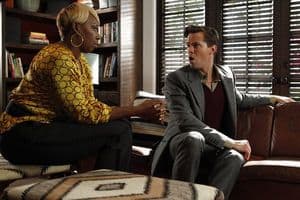 Mr. Rannells's character, Bryan, is a professional, impeccably dressed, and a bit of a white, gay, urban male stereotype. Mr. Bartha's character, David, is his love and his foil: he's introduced as a beer-drinking sports fan who's not just a doctor, but an OB/GYN! David is serious — he wants a child that will be smart, capable of "cognitive thought;" Bryan is almost frivolous — he wants "a skinny, blond child who doesn't cry." They rush to the phone when they see an egg donor candidate on video who says her friends say she looks like Gwyneth Paltrow (played by Ms. Paltrow, of course). Whether you enjoy this emerging trope for gay men on television or consider it a neatly packaged stereotype is worth a conversation for another day, and perhaps with a cinematic historian. Today, I would like to discuss the legal thicket into which these men so quickly jump.

The pilot portrays the guys' decision to have a baby as deeply emotional, yet spur of the moment. It wasn't just a cultural allusion to an impulse buy; Bryan decided he wanted a baby while shopping at Barney's! Though I am troubled by the manner of the decision, I am more concerned by the speed with which they go from idea to discussion to decision to interviews to their adorably blond surrogate of choice. That is not how the process usually works.

Having a child is no whimsical decision, but family lawyers know that finding an egg donor and interviewing a surrogate and waiting for implantation and waiting for a health birth can extend the process long after The New Normal might be off the air. Egg donor selection raises a litany of ethical questions about how willing we are to tailor our babies to particular specifications: height, weight, mathematical ability, imagination, skin color, eye color, etc. Choosing a surrogate is even more complex. The surrogate will be a fixture in the parents' lives for at least the next 9 months and most likely much longer, assuming implantation does not happen on the first try. Even then, many surrogates retain some connection to the family after delivery, at the encouragement of the parents. And, then, of course, there are those surrogates that change their minds, return the money, and sue to keep their child and break the surrogacy contract.

In some states, surrogacy contracts are black-letter-law illegal; in many others, courts declare them void as against public policy when there are no statutes directly on point. The choice of the surrogate — and, as a corollary, the state of gestation and birth — becomes more than a gut decision. It's a legal one.

The couple's surrogacy agent asks, "Who's gonna be the bio dad?" Later in the show, the couple cuddles in bed and Bryan remarks that he wants "Daddy David" to be the biological father. The discussion is an expression of love. Bryan feels that is more important for David, an only child, to "create something biologically [he] can recognize." He selflessly gives up biological fatherhood because, in the end, "not being the baby's bio dad doesn't make [him] less of a dad." Although he is right in theory and in many states, the patchwork of often antigay family laws throughout the country poses problems for the same-sex partners of biological parents.

Mr. Vaughn told me about one of his clients who lives in California who was recently matched with a surrogate in Colorado. But, Colorado, like several other states, including Oklahoma, Utah, and Florida, will only list the bio dad on the birth certificate. Birth certificates can sometimes be changed, but not in states that refuse to recognize gay relationships or same-sex second parent adoption. Without his name on the birth certificate, the no-bio dad has to sue for adoption if he lives in a state that allows second-parent adoption. Few do. If he is not listed, then he subjects his family to dissolution if something bad happens to the bio dad or if the couple divorces. Couples that decide to have children don't often think of these terrible eventualities when they're so much in love, but lawyers are trained to think of all possible problems and guard against them. 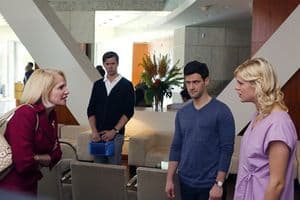 The pilot leaves audience with the wonderful impression that David and Bryan are going to have a wonderful relationship with Goldie. They will even help pay for her dream of going to law school and offer to give her their guest house rent-free. The couple's agent emphasizes the ease and simplicity of choosing an egg donor and surrogate by saying, "She's just like an E-Z Bake Oven with no legal rights to the cupcake." But, as Mr. Vaughn noted, the question of surrogate rights is not so simple.

Surrogacy lawyers often recommend civil, if arm's length relationships between parents and surrogates. Very close relationships can turn sour and, in many states, biology trumps eveything and the biological mother will often get parental rights especially if she has had a relationship with the child at the encouragement of the parents. There are several cases from New York to California where otherwise friendly relationships with surrogates conclude with splitting families apart.

Despite these questions, Mr. Murphy and his writing team know what they're doing with The New Normal, summed up beautifully by Ms. King, when she opines that "family is family, and love is love." This project is a television show, not a documentary, but the licenses it takes with reality never diminish the great power of the show's message. It could go as far as highlight the difficult and discriminatory legal regime potential gay parents face. More likely, The New Normal will be about the basic similarities between us all. We may dress differently, talk differently, and care about different things, but we all love and want to be loved. We all have dreams and all have obstacles to overcome. Our sexual orientation is who we are, but it changes nothing about our basic humanity. The more people learn that the better.