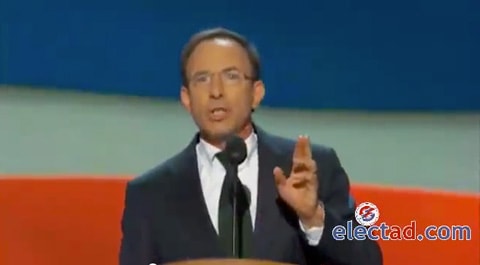 Andrew Tobias, DNC Treasurer, spoke about money and LGBT equality in a speech earlier today to the Democratic National Convention in Charlotte.

The economy does significantly better under Democrats and so do investors. The stock market is up 58 percent since Barack Obama took office. And listen to this: If you had started in 1925 with $10,000 and invested it in the market only in the 44 years that Republicans held the White House, it would have grown—not counting dividends—to less than $30,000. But to more than $300,000 in the 44 years Democrats held the White House!

I favor the party that invests in the future and boosts the middle class and those aspiring to join it. I favor the party under whose leadership $10,000 grows to $300,000 instead of $30,000.

Second: Equality. The Democratic Party under the leadership of Barack Obama has dramatically improved the lives of millions of lesbian, gay, transgender and bisexual Americans and at no cost to anyone else.

In a way, it was a wedding that married my two topics—money and equality—because that young tutor had grown up to become the chairman of the House Financial Services Committee, Barney Frank.