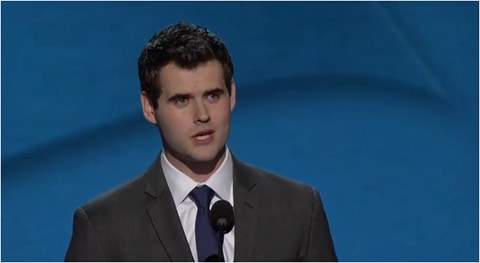 Zach Wahls, YouTube sensation turned LGBT activist, offered a powerful speech at tonight's Democratic National Convention about being raised by two moms and the importance of recognizing and supporting all families.

I'm a sixth-generation Iowan, an Eagle Scout, and I was raised by my two moms, Jackie and Terry. People want to know what it's like having lesbian parents. I'll let you in on a little secret: I'm awesome at putting the seat down. Otherwise, we're like any other family. We eat dinner, we go to church, we have chores. But some people don't see it that way.

When I was 12, watching the 2004 Republican convention, I remember politicians talking about protecting marriage from families like mine. Now, supporting a view of marriage as between a man and woman isn't radical. For many people, it's a matter of faith. We respect that. Watching that convention on TV, though I felt confused, frustrated. Why didn't they think my family was a real family?

Governor Romney says he's against same-sex marriage because every child deserves a mother and a father. I think every child deserves a family as loving and committed as mine. Because the sense of family comes from the commitment we make to each other to work through the hard times so we can enjoy the good ones. It comes from the love that binds us; that's what makes a family. Mr. Romney, my family is just as real as yours.