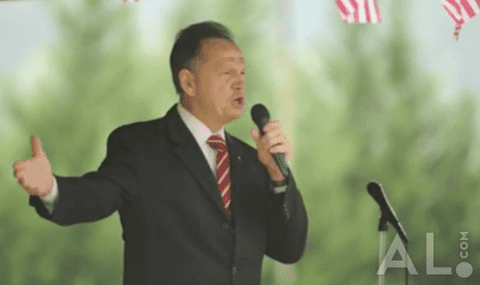 Roy Moore’s obstinate attempts to maintain a monument of the ten commandments outside the Alabama Supreme Court led the state’s Court of the Judiciary to dismiss the then-Chief Justice for ethics violations in 2003.

Since then the former judicial giant has found himself hanging around the government’s legislative branch, twice running for governor in Alabama and twice being considered by the Constitution Party as a potential presidential candidates and has appeared at anti-gay marriage rallies. But now he wants back on the judicial side of things and is running for his old position – and he’s touting the same blatantly right wing politics that made the ex-judge so objectionable in the first place.

Religion is still at the forefront of the candidate’s judicial platform. “People have forgotten why we need God,” Moore said at a Tea Party rally this weekend. “But let me tell you, without God, you have no rights.” And so too is the hideously homophobic notion that marriage equality will bring about the nation’s destruction.

“We cannot continue to borrow the future of our children and our grandchildren or we will suffer the consequences. We can’t keep going into debt. We can’t keep disparaging our military and promoting things like same-sex marriage, L-G-B-T. To hear the President of the United States say that we are promoting L-G-B-T. Let’s think about what that is: lesbian, gay, bisexual and transgendered rights,” Moore says in video included AFTER THE JUMP.

“Same sex marriage will be the ultimate destruction of our country because it destroys the very foundation upon which this nation is based. Divisive, I’ve been accused of being divisive I’ll tell you what’s divisive. It’s this Democratic platform,” he said, a reference to the Democratic Party’s inclusive platform.

State Representative Patricia Todd, who hails from Birmingham and is also the chair of Equality Alabama, told The Birmingham News it is “heartbreaking we still have this divisiveness” and described Moore’s language as “laughable.”

“It’s almost laughable to me. We’re going to bring the downfall of the country? When you have war and the economy? When you look at states that have same sex marriage, they’re all doing pretty good,” she said.

Watch Moore’s comments and leave your own AFTER THE JUMP.