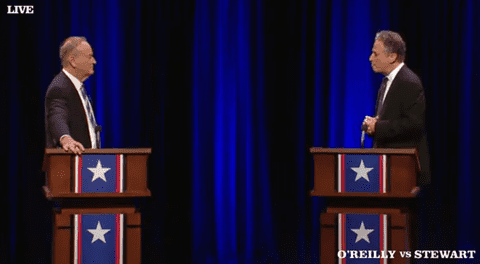 The Daily Show host centered his remarks around the idea that many on the right live in an “alternate reality,” of which O’Reilly is allegedly the mayor. It’s a place, Stewart declared, where “problems are amplified, solutions simplified.” The name Stewart gave O’Reilly’s domicile was somewhat more spicy, but you get the drift.

O’Reilly, host of the Fox News show The O’Reilly Factor, pulled no punches either, accusing Stewart of defending an addled, entitlement-laden society, the “poster child” of which is Sandra Fluke. Fluke, the Georgetown law student who came under attack from Rush Limbaugh after she spoke out on behalf of contraception coverage, is the embodiment of a country that is “lazy,” “mooching” and overly dependent on the federal government, he said.

Watch the video, via The Guardian, AFTER THE JUMP.