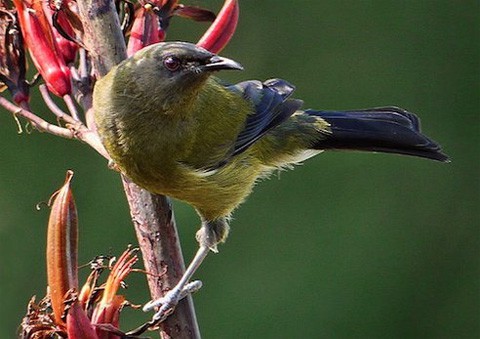 Recently, at Zealandia eco-sanctuary in New Zealand, biologists were surprised to discover that one of their newest animal arrivals seemed genetically predisposed to shunning those normally cut and dry distinctions of sexual dimorphism. Routine DNA testing on a young bellbird hatched there 18 months ago indicated that it was female, but as it grew things became clearly more complicated than that.

Instead of only growing the white feather pattern found in female bellbirds, this individual showed distinct signs of a male's dark plumage as well. Even the bird's behavior seemed indicative of male bird traits, such as in vocalizing in distinctively masculine calls and acting uncharacteristically territorial, leading biologists to declare the bird 'transgender'.

While other bird species have displayed 'transgender' traits, this is the first bellbird observed to have them.