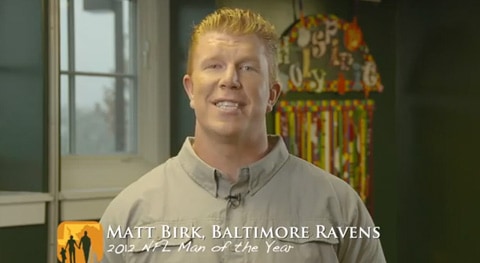 Baltimore Ravens Center Matt Birk tells voters to oppose Question 6, which would put the state's legislatively-passed marriage equality bill into effect in a new ad for the Maryland Marriage Alliance, which was uploaded to YouTube by the Maryland Catholic Conference.

Says Birk in the ad (my transcript):

"Marriage is not easy. but it has lasted throughout he ages as an honored institution because it provides unique foundations for societies and children. Marriage is more than what adults want for themselves. It is also about the next generation. Marriage is and should remain between a man and a woman. Gay and lesbian couples already receive benefits in Maryland, like hospital visitation, state health benefits, and tax breaks. They don't need to redefine marriage."