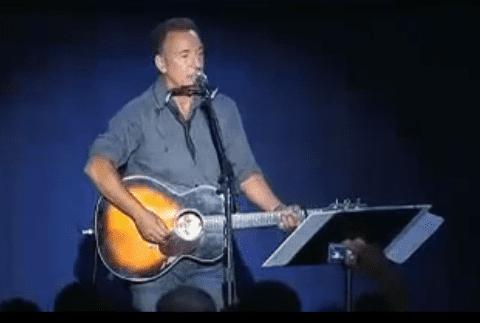 Bruce Springsteen headed to the swing state of Ohio for an Obama campaign rally, and he was literally singing the president’s praises.

After being introduced by Bill Clinton, the Boss sang a song he wrote specifically for the commander-in-chief, which was easier said than done, he explained. Obama’s name doesn’t have too many rhymes, so Springsteen ended up going with “mama” and then “Let’s vote for the man who got Osama”.

Obama’s official campaign slogan, “Forward” also proved a rhythmic struggle, so to make sure it was included, Springsteen had the crowd yell “Forward” after every line.

Here’s a sample from CNN:

I came to Ohio lookin’ for a date
Forward!
We kissed and I said it’s a helluva state
Forward!
We made love but it wasn’t so great
Forward!
Forward, and away we go
Smilin’ Joe, he really brought the drama
Forward!
Tuesday, Romney was schooled by Obama

Springsteen originally said that he would not get involved in this election, but changed his mind because his career is based on songs “about the distance between the American dream and the American reality” and he feels he owes it to the president, the man he thinks can bridge those gaps, to join the White House fight.

Clinton seemed tickled to be introducing Springsteen, telling the crowd, “This is the first time in my life I ever got to be the warm-up act for Bruce Springsteen. I am qualified, because I was born in the USA — and unlike one of the candidates for president, I keep all my money here.”