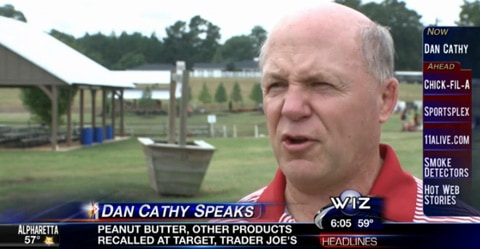 Atlanta's 11 Alive filmed a ridiculous interview with Chick-fil-A CEO Dan Cathy over the weekend after he agreed to answer questions about the recent anti-gay controversy in exchange for the network's coverage of his ranch and its Fall events.

He had his answers prepared. Someone told him to keep his focus on one word:

"Chick-fil-A's focused on families. We've always been that way. We're a family-owned business. We're led by family, and our restaurants are operated by families and we serve millions of families every week at Chick-fil-A. So, we're focused on the family."

Previous Post: « A Look at Where We Are with the Defense of Marriage Act (DOMA) and The Courts
Next Post: Paul Ryan Tells ‘Focus on the Family’ He and Romney Will Block Equality for Gay People »